Welcome!Sign InRegister
Sign In | Register |   No items in cart.Visit Shop 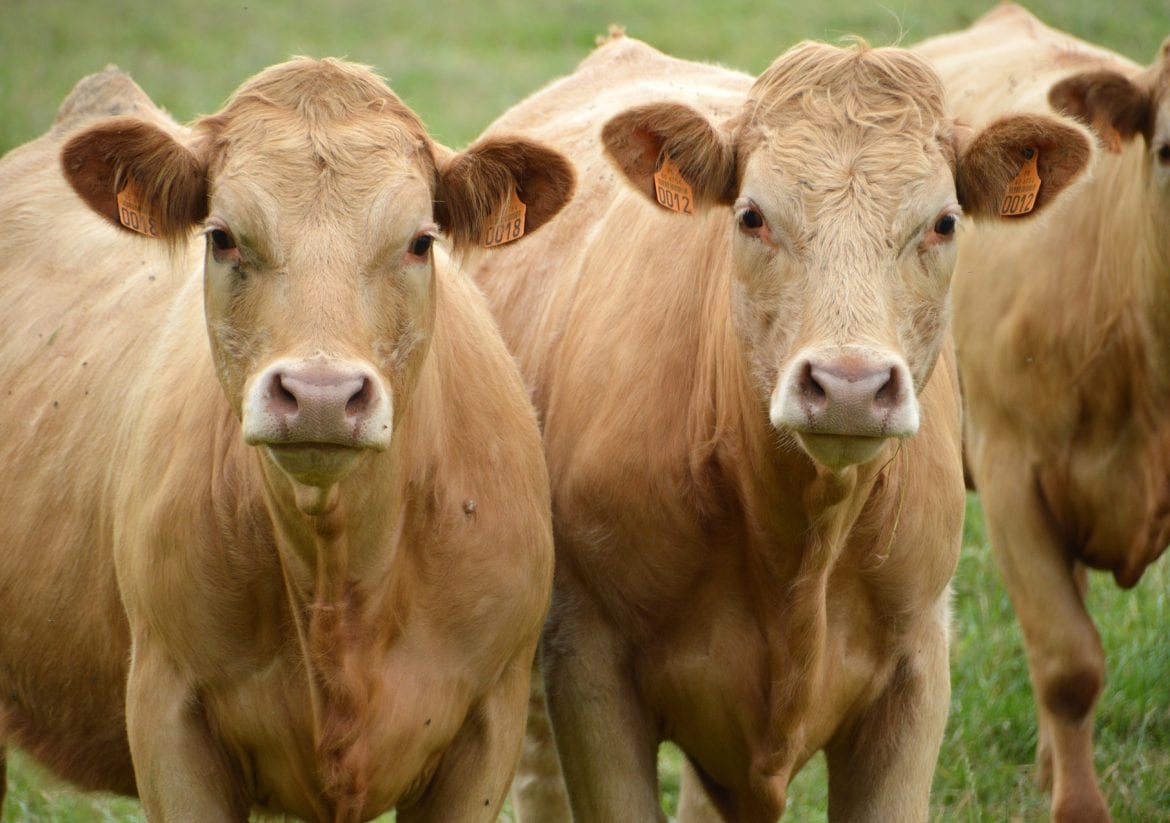 There are more than 250 cattle breeds throughout the world, with over 80 being readily available to the producers in the United States. Here is a look at 10 common breeds today.

The most popular breed of cattle in the United States is Aberdeen Angus Cattle, commonly referred to as Black Angus. This breed developed in the early part of the 19th century with its’ roots coming from northeastern Scotland. In 1873, Angus cattle were first brought to the United States. Aberdeen Angus Cattle are naturally polled (hornless) and are dominantly black in color. This breed is good natured, adaptable, and matures extremely early. Angus have high carcass yield with moderately high marbling.

Being excellent mothers, female Angus cows are known for their maternal traits and ability to produce milk that exceeds half her body weight for her calf.

Commonly called “Oreo cattle” because of their unique appearance, Belted Galloway cattle attract many questions about their origins. This breed developed during the 16th Century in the Galloway district of Scotland and were first brought to the United States in 1950s. Their skin is black or red in color and sandwiched around a white middle. Belted Galloways are naturally polled and well suited for converting rough grazing into lean flavorful meat. This breed does not require expensive housing because their double coat of long hair keeps them warm in the winter months.  Belted Galloway cows are considered a medium sized breed and live between 17-20 years. Their carcass dressed weights can exceed 60% of their live weight!

Belted Galloways produce a live calf every year, with some cows having two calves in one year.

Brahman cattle are the most common cattle breed in the world with their origins leading back to India. Brahman cattle are characterised by a large hump over the top of the shoulder and neck area and are medium in size with bulls generally weighing from 1600 to 2200 pounds and cows from 1000 to 1400. Varying in color, the majority of the breed is light grey; however, they can also be red or black. Brahman cattle stay cool in the sun because of their short, glossy hair that reflects the sun’s rays. They have upward-curving horns, large ears and an abundance of loose skin. This breed of cattle tends to be shy, yet highly intelligent. Brahman cows require kind handling methods and need affection.

This breed has an increased number of sweat glands. They also produce an oily secretion that repels pests and parasites due to its’ distinctive odor.

Originating in France, Charolais cattle were used for draft, milk and meat. The first cows came into the United States in the 1930s by way of Mexico. This breed is typically white in color, horned, and has a medium-framed, broad, sturdy body. With relatively late maturity and great meat conformation, this breed is well suited for fattening and cross breeding. Charolais are easy to manage with their relaxed temperament and fit into any system – grass based or intensive.

Charolais cattle can be found in any country that produces cattle.

Known as one of the smallest breeds of cattle, Dexter cattle originated in Southern Ireland and came to the United States in the 1900’s. This breed can be black, red or dun and most are horned. They require less pasture and feed due to their small size, weighing less than 1,000 pounds. Dexter Cattle are easy to handle and are extremely maternal. They are known for their longevity, with some cows living over 25 years. This breed matures early and produces excellent quality meat with good flavor and marbling. Full of personality, Dexter cattle are an ideal family cow, but they are also more economical pound for pound compared to their larger counterparts. As dairy cattle their milk is high in butterfat and easily digested.

Dexter cattle can produce more milk per body weight than any other breed.

Developing in England during the 1700’s, Herefords were the first English cattle to be recognized as a true breed. Originally this breed was bred during the industrial revolution for high yield of beef and efficient production. Hereford cattle were brought to the United States in 1817. Hereford cattle are dark red or red-yellow with white markings. The breed is muscular and large in size with less fat and more red meat, producing high quality beef. They are known for longevity and foraging ability.

Given the nickname “The Great Improver”, when Hereford cattle are crossed with other breeds, the resulting offspring adopt many of their great traits including fertility, longevity and efficiency.

The Simmental breed is one of the oldest, most widely distributed breeds in the world. Originating in Switzerland, Simmentals were brought to the United States in the 1800s. This breed is often red with a white head and band crossing over the shoulder area. They can be polled or horned with a large frame and sturdy build. Bred for beef production in America, this breed is known for rapid growth development and providing quality meat with excellent marbling.

Although this breed is originally red and white, today, over 80% in the United States are black due to a large push to rid the cattle of spots and diluter genes.

This breed has the same origins of the Aberdeen (black) Angus cattle. They resulted from Red English longhorn cattle being bred with black Angus cattle because they needed a cow heavy enough to be used as a draft animal. Not every offspring was red, only about one in four calves were, with the rest being black. Initially, red and black offspring were classified as purebred until reds were banned in 1917 from registration.

Red Angus are the leading U.S. beef breed used in artificial insemination around the world.

Truly adapted to America without any human interruption, this cattle breed originated from the first cattle brought to North America more than 500 years ago and was the result of “survival of the fittest”. After almost going extinct in the 1900s due to crossbreeding, Texas Longhorns arose and gained popularity again. This breed varies in color and range from 800 to 1500 pounds. They are slow to mature; however, their reproductive period is twice as long compared to other breeds. Longhorns are naturally resistant to many diseases and live long healthy lives. This breed produces bright red, lean meat full of nutrition and flavor, making them high in demand.

No two cows from this breed are alike, they differ in size, color, horn length and personality.

Referred to as “Butcher’s Animal” this breed is almost as old as the European continent itself. Limousin originated in France in an area with harsh climate conditions. Because of this they developed an unusual adaptability to environmental conditions. These cows were used as work animals, and then slaughtered at the end of their life for beef.  Limousin cattle are big boned and strong with a golden-red color. They mature early and produce lean beef.

This breed has build a reputation for being The Carcase Breed because it produces meat with a low proportion of bone to fat.